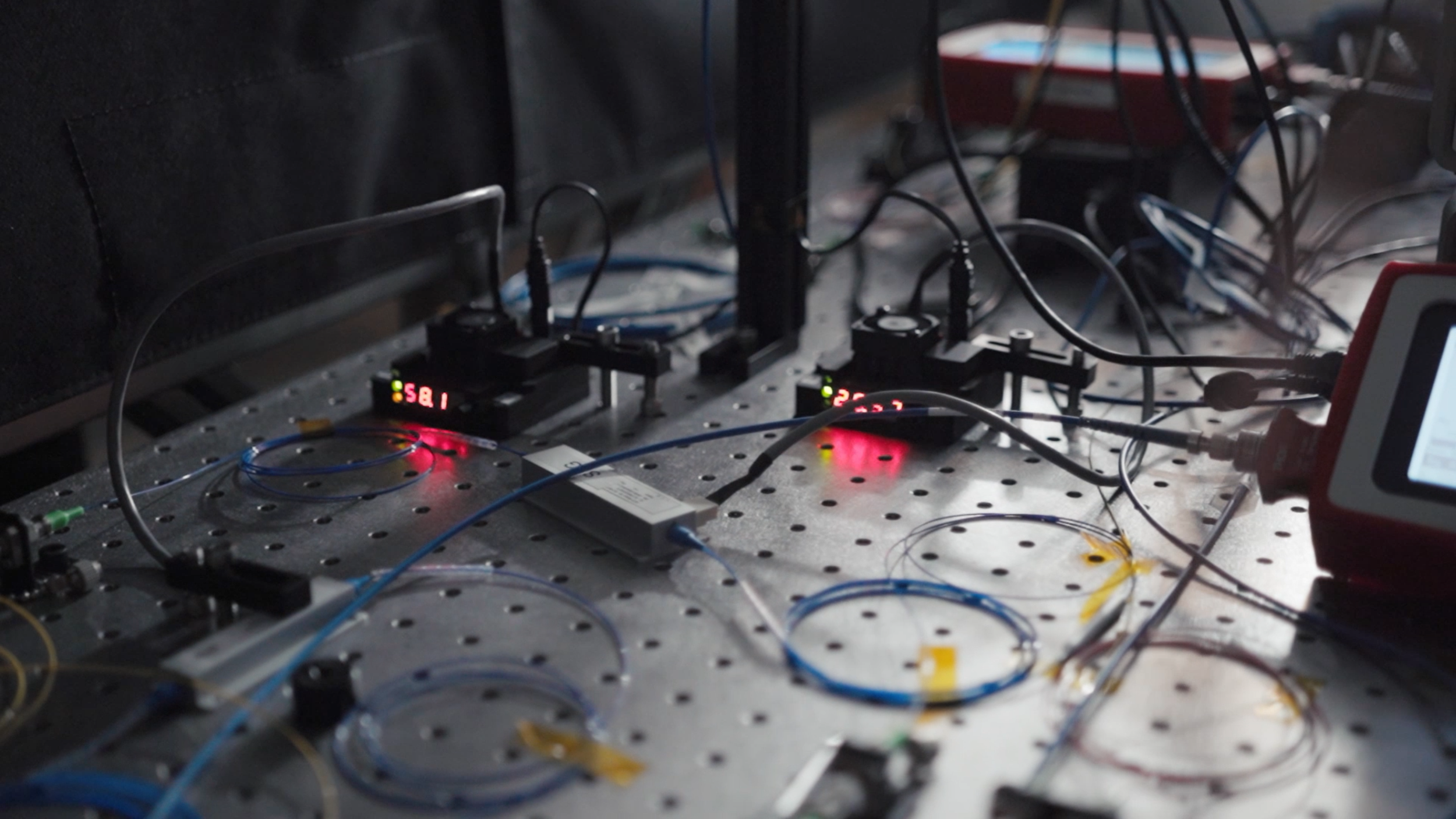 A functional quantum Internet, a network in which information stored in qubits is shared over long distances through entanglement, would revolutionize the fields of secure communication, data storage, precision sensing, and computing. High-fidelity quantum teleportation is essential for secure long-distance communications and a practical quantum Internet. The work published in PRX Quantum presents—for the first time—sustained, long-distance (44 km of fiber) teleportation of time-bin qubits featuring state-of-the-art fidelity (>90%) and narrow-band photons with narrow-band entangled photon pairs. A sophisticated analytical model that accurately accounts for experimental imperfections supports the experimental results.

The measurements were performed on the Caltech and Fermilab Quantum Network testbeds (CQNET, FQNET), two teleportation systems that were designed, built, commissioned, and deployed by Caltech’s multidisciplinary multi-institutional public-private research program on Intelligent Quantum Networks and Technologies (IN-Q-NET). IN-Q-NET was jointly founded in 2017 by Caltech and AT&T with initial collaborators from the Fermi National Accelerator Laboratory, and the Jet Propulsion Laboratory.

These unique quantum network testbeds use state-of-the-art solid-state light detectors in a compact fiber-based setup and feature near-autonomous data acquisition, control, monitoring, synchronization, and analysis. The teleportation systems, which are compatible both with existing telecommunication infrastructure and with emerging quantum processing and storage devices, represent a significant milestone towards a practical quantum Internet. The FQNET and CQNET networks are currently being used to improve the fidelity and rate of entanglement distribution, with an emphasis on complex quantum communication protocols and fundamental science. The networks are accessible to multidisciplinary researchers for research and development purposes and serve both fundamental quantum information science and the development of advanced quantum technologies.

“We are very proud to have achieved this milestone on sustainable, high performing and scalable quantum teleportation systems. System upgrades we are expecting to complete by Q2 2021 will further improve these exciting results,” said Spiropulu, Shang-Yi Ch’en Professor of Physics at Caltech who directs the IN-Q-NET research program. “We would not have been able to pull this together without the superior JPL quantum sensors developed for the scope of this program in synergy with relevant NASA programs and a very diverse team whose expertise spans high energy and condensed matter physics and engineering, quantum optics, quantum information science and engineering, computation as well as partnerships with industry for custom developed cryogenics and modern telecommunication infrastructure. Importantly, the program was co-founded with AT&T in an effort to accelerate quantum technologies with emphasis on quantum networking,” she added. Spiropulu and collaborator Christoph Simon discussed the challenges and opportunities of building a quantum internet in the APS September 2020 Newsletter editorial.

The team includes quantum networking and quantum optics researchers from the University of Calgary and Harvard, quantum sensing researchers from Jet Propulsion Laboratory, high energy physics, instrumentation and computing experts from Caltech and Fermilab and systems engineering and integration experts.

Many Caltech undergraduate students participated as summer interns in various experimental and data acquisition and analysis aspects of the CQNET/FQNET research under the SURF and WAVE summer programs. JPL’s Matthew Shaw and Boris Korzh engaged in this work starting in 2017 and brought unparalleled leadership and expertise in quantum detector technologies. Caltech’s Research Scientist and Fermilab’s Lederman Fellow Cristian Peña, is the co-spokesperson of the collaboration and Caltech Research Professor Si Xie is the physics and technical coordinator. Harvard Research Scientist Neil Sinclair, co-affiliated with Caltech, worked on FQNET at Fermilab and CQNET at Caltech from the very beginning of the IN-Q-NET program in 2017. The lead author of the publication, Caltech postdoctoral scholar Raju Valivarthi is an expert on constructing and deploying quantum networking systems having started as a graduate student. He has previously worked on demonstrating a metropolitan quantum network in Canada in collaboration with JPL and University of Calgary’s collaborator Daniel Oblak. Caltech postdoctoral scholar, Nikolai Lauk, led the development of the theoretical modeling of the systems. Results from this publication have been presented in the summer of 2020 in the OSA 2.0 conference by team members including Caltech graduate students Samantha Davis and Andrew Mueller. The results were also presented in the Fall of 2020 in the context of the Quantum Development Economic Consortium (QED-C). IN-Q-NET is one of the first academic research organizations that joined QED-C and engaged in the Department of Energy’s efforts towards the National Quantum Initiative enacted in 2018. The IN-Q-NET team benefits from AT&T’s Yewon Gim, who is trained in experimental quantum science and manages the IN-Q-NET industry research collaborations.

The head of the Quantum Science of the Fermilab Quantum Institute and collaborator, Panagiotis Spentzouris noted that the results presented in this publication form a crucial foundation for the construction of a long-range metropolitan quantum network (IEQNET) being developed in the Chicago area by Fermilab in collaboration with Argonne National Laboratory, Northwestern University and Caltech, as well as industry partners and funded by the US Department of Energy Office of Advanced Scientific Computing Research.

Fermilab’s Director Nigel Lockyer remarked in a communication that the systems and results presented in this work set a concrete path for a practical quantum Internet as envisioned in DOE’s 2020 Quantum Blueprint report. Fermilab’s Deputy Director Joe Lykken emphasized Caltech’s leadership and collaboration as early as 1970 when Barry Barish developed the first neutrino experiment at Fermilab. He commended the strong, diverse IN-Q-NET team and the partnerships it has been forging with National Laboratories, academic institutes and industry to achieve its ambitious goals.

“This is no walk in the park,” said Spiropulu, “If you take a look at the acknowledgments in the publication, you get a sense of the vast human network that we needed to continually engage with, in so many areas of science and technology to build this from the ground up. The reward is manyfold. One side that I am particularly pleased with, is the commitment and passion of extremely talented and creative junior researchers, including undergrads!”

“Congratulations to the team,” said Carl Williams, National Institute of Standards and Technology’s Director of the Physical Measurement Laboratory. “What they set out to accomplish is not trivial, and they did achieve significant progress with these systems and results.” “The QED-C has been closely following the important developments by IN-Q-NET and the impacts on the associated supply chain and on industry are potentially quite profound.” remarked Joe Broz, QED-C Executive Director.

“’Maria (Spiropulu) walked into my office at Lockheed Martin headquarters a few years ago asking for advice on forming an academic research/federal laboratories/industry alliance to advance quantum technology and networks,’” noted Norm Augustine, now the retired chairman and CEO of Lockheed Martin Corporation. ‘I told her about some of the challenges she would face, but also of the enormous opportunity for discovery and adventure that such an endeavor would offer. I am delighted to see the fruits of the research thus far, and look forward to even greater accomplishments in the years ahead.’”

“AT&T has long been at the forefront of innovative, fast, secure communications. That’s why we’re excited by these advances in quantum technologies by the Department of Energy, academia and industry through IN-Q-NET. This is a truly impressive partnership,” said Jeff McElfresh, CEO of AT&T Communications."

“JPL is very pleased to advance quantum technologies and systems for NASA and the Department of Energy, and we look forward to exploring future opportunities to expand collaborations with IN-Q-NET in quantum networking and quantum sensing,” said Lt. Gen. Larry James, Deputy Director of the Jet Propulsion Laboratory.

“The impressive demonstration of quantum teleportation in realistic materials at realistic rates brings us closer to exploiting the advantages of entanglement in quantum networks,” said Caltech’s President Thomas F. Rosenbaum, a quantum science researcher himself, who helped found IN-Q-NET at Caltech with AT&T in 2017, “We look forward to further breakthroughs from this ambitious collaboration.”

US Government Funding Acknowledgement: This research is supported by the Department of Energy Office Science and funded since 2018 through the DOE's Quantum Information Science Enabled Discovery (QuantISED) for High Energy Physics program.